Do Not Shake Breastmilk 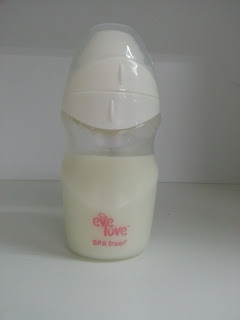 Linda J. Smith, BSE, FACCE, IBCLC
Why not?
Because shaking expressed mothers' milk (or boiling or freezing it) denatures the shaped molecules of the protective proteins, leaving only the pieces - the amino acids - the parts. Lactoferrin, lysozyme, and other protective components work their protection magic when they are in their original shaped molecular structure. Some components remain intact, even during freezing, shaking or heating. They not only protect the gut from many kinds of infection, but also prevent inflammation of the gut lining. Even broken up, the separate amino acids are still really good stuff and are digested by the baby as nutrients.
Imagine a set of pop-beads assembled into a necklace or bracelet. When the beads are acting as a bracelet or necklace, they are doing their job as protective elements. When you break apart the beads, you have in your hand many individual chunks of amino acids which are then digested.
Cellular components are also susceptible to damage by physical stress. After all, they are living cells.
With mother's milk, you get at least two functions for the price of one. With manufactured formula, you only get the individual beads, never the necklace or bracelet. And never the living cells.
So, please handle human milk gently, respectfully and kindly. It's far more than perfect food for babies - it's a living tissue and protective shield too.

Posted by Shahirah Mohd Hassan at 00:30