Posted by Shahirah Mohd Hassan at 19:38 No comments:

An Article on Tandem Nursing by Anna Smith (IBCLC).

The AAP (American Academy of Pediatrics) recommends exclusively breastfeeding your baby for the first six months of life, with no solids or supplements, and continuing to nurse throughout the first year of life and beyond. During the period of exclusive breastfeeding, it is very unlikely that you will become pregnant. However, as more and more mothers recognize the advantages of long-term nursing and natural weaning, more of them will become pregnant while they are nursing their baby.

The mother facing the decision of whether to wean or continue nursing during her pregnancy often has mixed emotions, and may get conflicting advice from friends, family, and health care providers. The most common concern is whether continuing to breastfeed will put the expected baby at risk in some way. There is no evidence to suggest that nursing while pregnant endangers the fetus during a normal pregnancy. If a mother has previously delivered a premature baby, develops signs of pre-term labor, or is carrying multiples, there is concern that a hormone released during lactation (oxytocin) may stimulate contractions and trigger a premature labor. In these special situations, mothers are often advised to wean their older child. Research suggests that the uterus is not receptive to hormonal stimulation from oxytocin until around 24 weeks gestation, so it is generally safe to consider nursing until about 20 weeks, even in these special situations. There is almost never a need to wean abruptly during pregnancy. 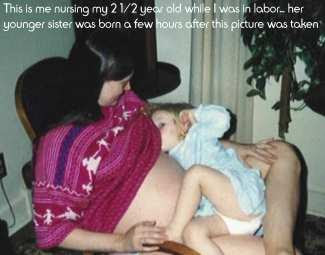 The mother who is deciding whether to continue nursing during her pregnancy has several factors to consider: her medical history, her physical and emotional comfort level, the nursing child’s age, and his need to nurse. If the pregnancy is progressing normally, then the decision of whether to continue to breastfeed is more an individual ‘parenting’ decision rather than a ‘medical’ decision. 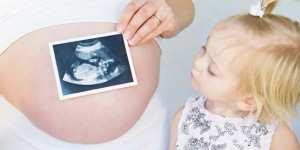 There is no evidence that nursing during a pregnancy will cause miscarriage during the early months. Miscarriage occurs spontaneously in about 16-30 percent of all pregnancies, so it will sometimes happen while a mother is nursing. The nursing mother should not add the burden of guilt to the pain of losing a baby to miscarriage.

Nursing during pregnancy will not deprive the fetus of essential nutrients, and will not create a harmful “drain” on the mother’s body. During pregnancy, it is always important to eat nutritiously, gain weight appropriately, and get adequate rest. A well-nourished mother should have no problem providing enough nutrients for both her unborn baby and her nursing child.

Breastfeeding provides several opportunities each day for the expectant mother to take breaks and rest while her toddler nurses or naps.

Due to hormonal changes, most mothers will experience some degree of nipple soreness during pregnancy, which can make nursing very uncomfortable. Nipple soreness is the most common reason given for weaning during pregnancy. The soreness usually is most pronounced during the early months of pregnancy. Since the cause of the soreness is hormonal, there is no real treatment other than time. Some mothers find relief by reducing the time the baby spends at the breast, limiting nursing sessions to nap and bed-time,and others find that reminding the toddler to “open wide” while latching on may reduce soreness.

During pregnancy, most mother’s milk supply will decrease due to hormonal changes. During the second trimester, the milk will begin to change to colostrum. Both the quantity and the taste of the milk change dramatically during this time, and many babies will wean themselves when the milk changes. If you are nursing a baby younger than 6 months when you become pregnant, you will need to carefully monitor his growth and weight gain, and supplemental feedings may be necessary. Older babies who are eating solids will usually show an increased appetite for other foods as your milk supply decreases.

Some babies don’t seem to care whether they are getting a lot of milk when they nurse. That’s where the emotional component of breastfeeding becomes a factor. Babies vary in their need for oral satisfaction, physical contact, closeness to mother, and willingness to have those needs met in ways other than nursing.
Some toddlers continue to find breastfeeding very important all the way through the pregnancy and after the birth of the new baby as well. Nursing siblings who are not twins is called “tandem nursing”. In our culture, this concept is unusual, although other in many other cultures it is a common practice. It is not unusual to have mixed feelings about nursing during pregnancy or tandem nursing. Negative feelings are common, due to physical discomfort and fatigue, as well as feeling “touched out” after nursing for so many months. For the mother who finds herself resenting the older baby’s demands, and has difficulty focusing enough attention on the new baby, weaning may be the best choice. She should try to wean gradually, nursing the new baby when the toddler is occupied with other things, and substituting special activities and snacks for nursings. Dads can be a big help with this process.

When they choose to tandem nurse, many mothers find that a unique closeness develops between their nursing siblings. Sharing at the breast can reduce the jealously and sibling rivalry that often accompanies the arrival of a new baby.

Because the older child is receiving nourishment from foods other than breastmilk, the newborn should be allowed to nurse first, ensuring that he gets lots of colostrum. Nursing a toddler can help relieve engorgement. Because the toddler will nurse more vigorously than the infant, the mother may find that she produces an oversupply of milk. If this occurs, and the newborn chokes when attempting to nurse, she may want to let the toddler nurse briefly before putting the new baby on the breast. Within a short period of time, the milk supply will adjust to the needs of the two siblings, just as it would if the mother were nursing twins or triplets. The two nurslings can be fed at the same time, or separately – whatever works best for you.

There are no special concerns about hygiene. The nipple secretes an enzyme that reduces bacterial counts, and breastfed babies are born with immunities to most germs found in their home environment. Most germs involved in common illnesses are contagious for days before symptoms appear, so tandem nursers have been exposed by the time you know one of them is ill. If you are dealing with a serious illness, one that is very contagious, or thrush, you may want to limit each child to one breast temporarily.

Sometimes a toddler who was weaned before the new baby’s arrival will decide that he wants to nurse again. Often a discussion of how he used to nurse, but now he’s a “big boy” and can eat grown up food, will suffice. If he is insistent about it, it is probably best to let him try. Most of the time toddlers who have weaned have forgotten how to nurse, and will lose interest quickly. Allowing him to nurse until he feels more secure about his new position in the family can be a good idea.

Tandem nursing is not for everyone. If it is not working out well, mothers should wean the older child without feeling guilty about it. It is important to give the older baby lots of extra cuddling and attention so that he knows that although he is losing the comfort and security of the breast, he is not losing his mother’s love.

If a mother does choose to tandem nurse, she can find it very gratifying for everyone involved. Knowing that she nursed her baby until he outgrew the need is a very rewarding feeling, and can result in increased security and self-esteem in the child who weans when he is ready to move on to the next stage of his development, and not just because his mother became pregnant.

Posted by Shahirah Mohd Hassan at 19:47 No comments:

Fenugreek (as Milk Booster) During Pregnancy

Recently I was approached by a Mummy who is Breastfeeding her 1 year and 3 months old child. She is also Pregnant with her second child (7 weeks POG).

She asked was it safe to take Fenugreek (As Milk Booster) during Pregnancy?

Probably this few sentences from few resources would help summarize the answer:

"Fenugreek is LIKELY UNSAFE in pregnancy when used in amounts greater than those in food. It might cause early contractions. Taking fenugreek just before delivery may cause the newborn to have an unusual body odor, which could be confused with “maple syrup disease.” It does not appear to cause long-term effects."
Source:  http://www.webmd.com/vitamins-supplements/ingredientmono-733-FENUGREEK.aspx?activeIngredientId=733&activeIngredientName=FENUGREEK


"Avoid use in pregnancy as fenugreek has documented uterine stimulant effects. It has been used to stimulate milk production in nursing mothers. Excretion into milk has not been studied."
Source:  http://www.drugs.com/npc/fenugreek.html


"Traditionally, fenugreek has been used to stimulate labor. However, this does not mean that it is safe or effective for such use, since it has never been studied for such purposes. For instance, think about the many strange ways women try to induce labor (such as eating kiwi, eating spicy foods, or taking bumpy car rides). There is no real way to know if these methods are effective, even if they work. It could very easily just be coincidence.
Even though there is no research to suggest that fenugreek works for stimulating labor, it is a good idea to avoid taking it unless you are full-term (37 weeks pregnant or beyond). If fenugreek does happen to be effective for stimulating uterine contractions, which is currently unknown, it could cause preterm labor or miscarriages if taken earlier in pregnancy. Also, there have been reports of body or urine odor smelling like maple syrup in infants after fenugreek was used for labor stimulation (the herb contains a compound that smells like maple syrup). Sometimes, this is mistaken by medical providers as a rare but serious condition known as maple syrup disease.
Pregnancy is not a time to be experimenting with herbs or medications. It is best to stick with products that are known to be safe for pregnant women. As an herb that has been studied very little, fenugreek is not one of these products."
Source: http://diabetes.emedtv.com/fenugreek/fenugreek-and-pregnancy.html
Note: The above are merely paragraphs taken from different resources. To read whole article, mummies may click on the links above.
Moral of The Story, Do Consult you Healthcare Proffesional before starting any Herbs/Supplements/Medications during Breastfeeding and Pregnancy :-)
Much LOVE <3
Posted by Shahirah Mohd Hassan at 09:00 1 comment:

Another Benefit for Mummies who Breastfeed :-)

Posted by Shahirah Mohd Hassan at 08:49 No comments: