It's been a while since I've blogged. Feel so good to be able to write in this entry..Yes, I am exhausted & sleep-deprived from taking care of my newborn who is now 6 weeks already, Alhamdulillah. And yes, on top of that, looking over my 2 elder children who are at schooling age. But I have been really wanting to write this entry and here is why..
I REALLY WANT OTHER MUMMIES NOT TO GO THROUGH WHAT I HAVE WENT THROUGH& HOPE THAT THEY HAVE A SMOOTH START TOWARDS SUCCESSFUL BREASTFEEDING.

Hopefully this humble entry of mine might somewhat trigger & inspire mummies to search for more knowledge!

Eversince I was pregnant with my first child while still in final year medical school, I wanted to fully breastfeed my baby. But on certain circumstances, I only managed to breastfeed her until confinement ended (that too, not fully breastfed but mixed with formula occasionally).
With my second child, even though I was more prepared, history seemed to repeat itself. I only managed to breastfeed her until confinement ended, and that too, mixed with formula. Yes, I was in utmost despair when my milk totally dried up and she was fully on formula at 6 weeks old. I began relactating when she was 12 weeks old & Alhamdulillah 3 months later, she was fully drinking breastmilk again until she was 2 years and 3 months old!

So I noticed from my past 2 experience that the confinement period is such a "crucial" phase to ensure that breastfeeding and bonding is established. Alhamdulillah, I think I got the hang of it this time around :-)
Took me 3 children to learn the odds of breastfeeding! Haha! But guess what, it is so rewarding to be able to fully breastfeed my son who is 44 days old now. Watching those hair and nails grow with only breastmilk, MashaAllah..!

Anyways, to recap, I had a waterbirth at hospital with my son this time around. Below is the link to my gentle birth story:
http://birthandbeyondbiz.blogspot.my/2014/12/blissful-water-birth-of-our-son.html


Soon after birth, I held him on my chest and we had 2 hours of skin to skin contact. I propped up and left him crawling on my chest to latch by himself. It's called the "breast crawl", I think :-) Alhamdulillah, he was such a champ, following his natural instincts and succeeding in latching. Such a blissful moment, I felt so rejuvenated & empowered after birth..!

I was discharged on 2nd day after delivery, so on the 2nd night, I was left alone with a newborn. Fear creeps in. I remembered my past experience with trying to breastfeed my babies, and after 1 hour of non stop latching & sore/cracked nipples, baby cries even harder. What I did at that time? Mixed some formula & gave it to the baby. Baby drank vigorously & slept. And how I felt during that time? Like the biggest loser!!! I had latching issues in my previous experiences, which was a major factor causing me not able to successfully fully breastfeed. Alhamdulillah, with knowledge this time around, things were different.

Anyways, this time around, things were a bit different. I watched baby for feeding cues, did not wait for him to cry, and breastfed him every now and then, ensuring that he had the properly latched. Alhamdulillah, he seems content after breastfeeding. Also this time, I noticed that my baby had a tongue-tie which caused me inevitable distress everytime he latches (so painful, I cried each time he latches). On day 5, we brought him to the surgeon for a frenectomy & Alhamdulillah, mother & baby were happy with breastfeeding & latching.
FYI, tongue tie interferes with proper latching & hence, baby would not get enough milk, leading him to being fussy, causing mother distress, mother tops up with formula, breasts not emptied regularly...and last resort, leading to low milk supply! :-(

This time around, I did not want to introduce my son to bottles during confinement period. Even during my "urut" session which was on the 3rd day of confinement, I gave the nanny a syringe to feed him expressed milk. Unfortunately, on day 4 & day 5 (before releasing the tongue-tie), I was in desperate measures due to the pain during latching, so I had to express milk & my nanny fed him the milk with a bottle. I was so afraid that he might not want to latch again, but Alhamdulillah, he did latch like a champion 2 hours after the frenectomy! :-)

I started expressing milk on day 3 confinement using my hands (because milk full of colostrum & sticky during that time) so pumping might not be a good idea, because the milk might just stick to the breastshields & does not reach the baby, hence such a waste of good nutrition.Why start expressing milk so early? Because I had urut sessions on day 3, 4 and 5; hence I needed someone to tend to the baby for 2 hours while I "mengurut".I started using the breastpump to collect milk on day 5, since the milk was maturing & not so sticky anymore.

We co-sleep at night to make breastfeeding easier. Yes, he wakes up every hour for feeding. But that doesn't mean he is not getting enough milk. It means that breastmilk is easy on baby's tummy & easily digestible, hence babies who breastfeed tend to nurse frequently. It is also a God's made miracle, whereby the more babies suck, the more milk will be produced, hence milk supply will be established!
Darn, if only I knew this during my first baby, I wouldn't have been topping up with formula milk thinking she is hungry & I do not have enough breastmilk!!!

And yes, sometimes babies do get all fussy & want to nurse all the time. But that does not mean he is not satisfied from feeding at the breast. He may be having a growth spurt & simply wants to feed round the clock. The baby feeding round the clock is a mechanism to help increase your breastmilk supply. Again, nature takes it's course! The next day you know, things will be back to normal. Again, if I only knew this!!!

When do I find time to pump breastmilk?
I am indeed a busy mother. So mostly during confinement, I disciplined myself to pump 4 to 6 times a day. Mostly tandem pumping (breastfeeding baby on one side, pumping on the other side). This method saves time so that I can get some rest or tend to other kids while baby is sleeping.


Another method is I usually pump right after baby breastfeeds. This method not only helps to empty breasts efficiently but also helps to build up milk supply as your body will work to make more milk in assumption that baby needs more milk because of the extra stimulation from pumping. That being said, for most mothers, I do recommend pumping 1 hour after breastfeeding (if you feel your breasts are "empty" after direct feeding. Reason being is, firstly, pumping straight after direct feeding might lead to you not getting as much expressed milk as you expected. Hence, this might be a source of discouragement for new mothers. Pumping 1 hour after direct feeding instead of immediately after direct feeding is recommended because after effective direct feeding, your breasts has already removed themilk so automatically more prolactin will be secreted to make milk (without the need of pumping), so there is no need to pump just yet. But, 1 hour post direct feeding, there will be accumulated milk in your milk ducts already, hence pumping as an additional method of milk removal from the breasts at this time would be beneficial to empty the breasts and stimulate the production of prolactin (& hence more milk).

It also helps that I am using the Lily Breastpump as it is rechargeble& handsfree so I can move about while pumping to tend to other kids, or do other things like eating etc. I also use the Pearl Breastpump & found it superb in emptying breasts as it is a heavy, duty double breastpump.


How do I keep track of my breastmilk stock? Using the Eve Love Breastfeeding App which is available for download at Google Playstore. 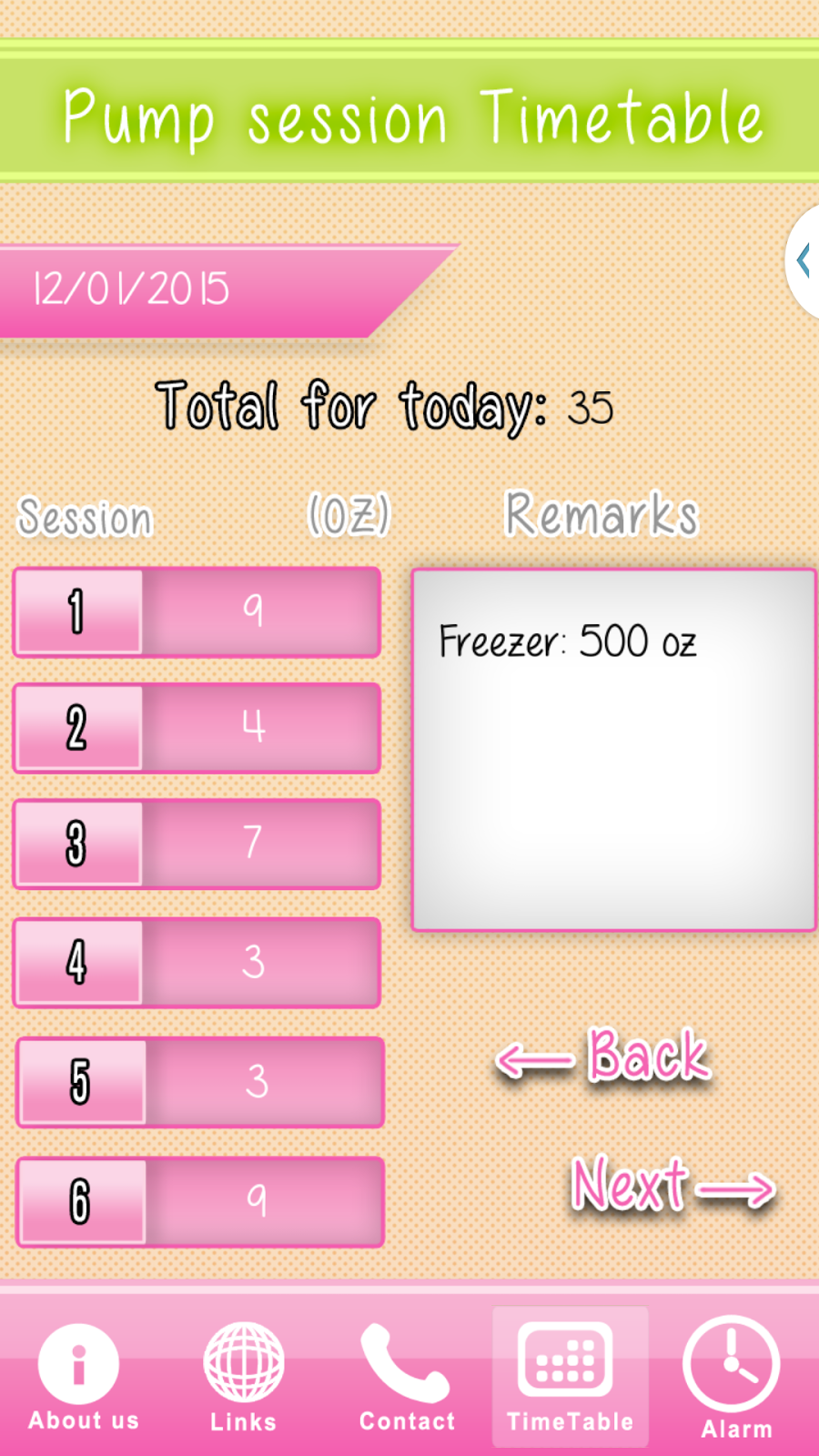 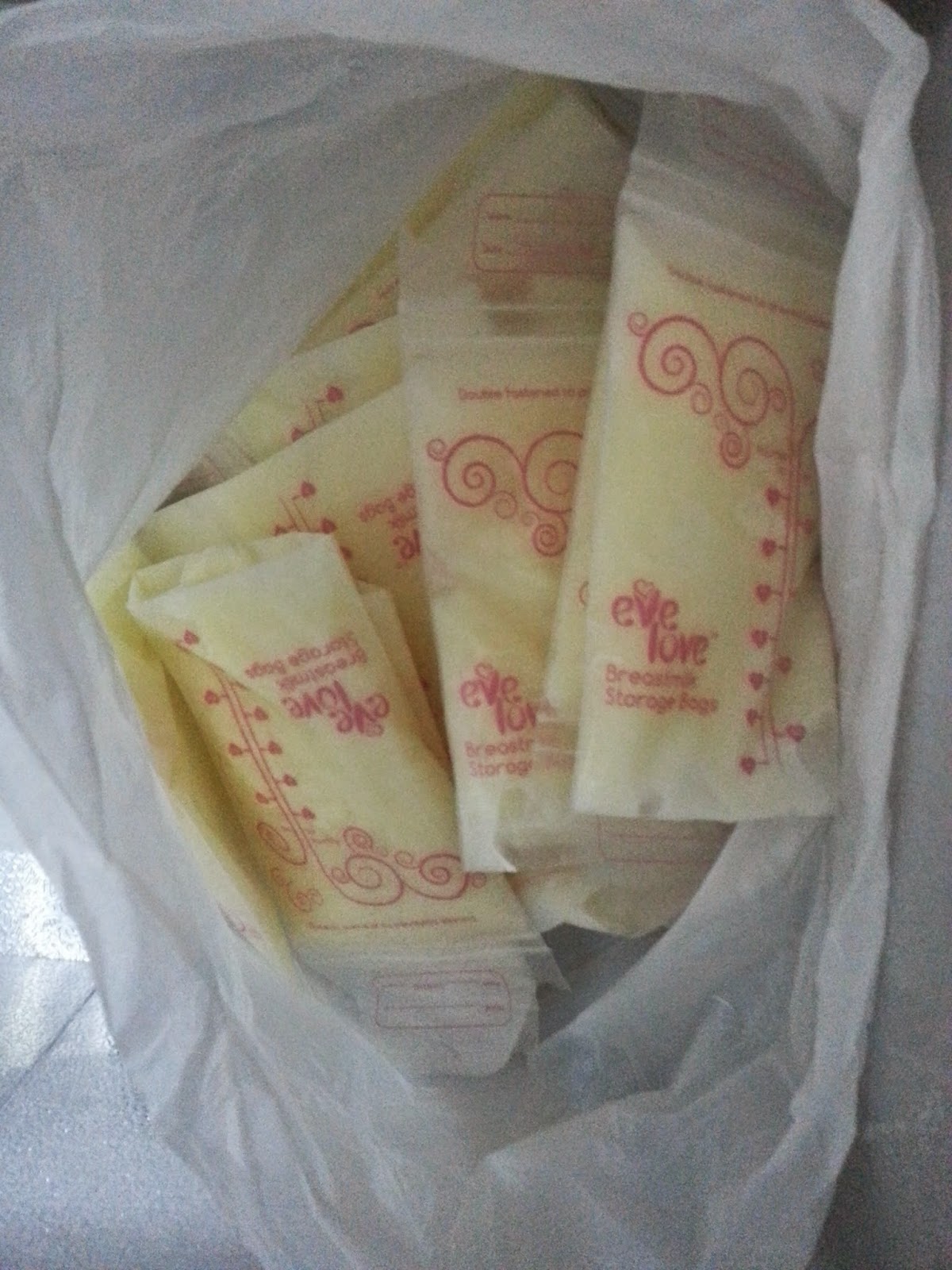 What did I eat? Any special milk boosters?

I just ate all the nutritious & healthy food to ensure that my baby gets quality nutrition :-)
Below are some which helped my breastmilk supply increase. Please note that every individual is different, so the food that increased my breastmilk , might not work the same for you. And special thanks to my dear friend, who took the trouble to prepare chicken essence & some traditional herbs for me (which indeed, helped increase my breastmilk supply & kept me feeling energized).To me, natural source of food are the best!


So mummies, do equip yourself with knowledge as much as you can while pregnant. Knowledge is king.
Million Thanks to my dear husband who has supported me throughout, giving me encouragement to breastfeed :-) He has been with me through my ups & downs of breastfeeding all these years!


I have came accross a quote somewhere which says, Breastfeeding is 90% Mental, 10% Physical. I guess it's really true. You have to have a goal, have a plan on how to achieve the goal, & of course, pray & surrender that The Creator grants your humble wish to fully breastfeed your child. InshaAllah, you will succeed :-)
Posted by Shahirah Mohd Hassan at 19:25 1 comment: